Get fresh music recommendations delivered to your inbox every Friday.

by Tired of Triangles 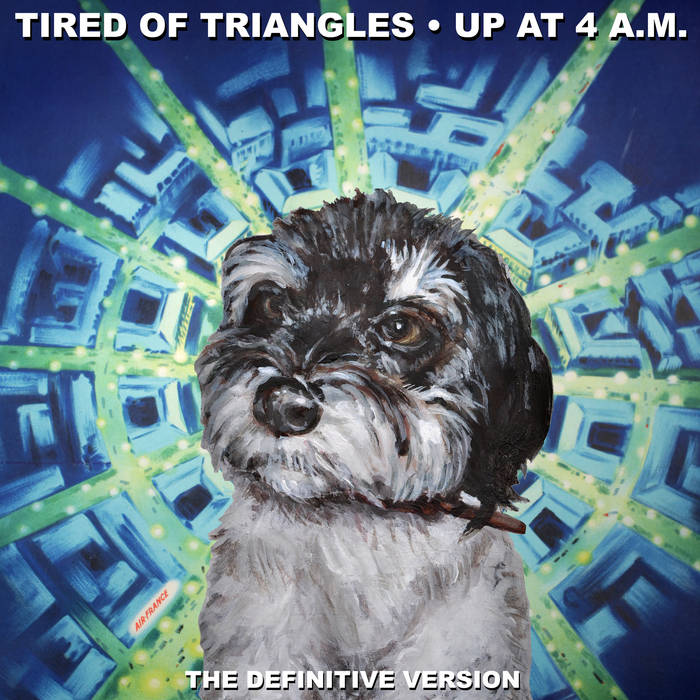 In early 2015, after years of not playing guitar in any regular sense, artist Dave Andrae slowly got back in the game — in the comfort of his own home at least — and hatched the idea of making music under the name Tired of Triangles. This was over a decade and a half after Andrae had played in various bands in the Milwaukee area as a teenager and ran the Beeshu Records label, a small and short-lived imprint notable for being the first label other than Hospital Productions to release a recording by noise artist Prurient (then just starting out but now a “household name” in some circles). Toward the tail end of this early concentrated period of band activity that lasted until his early twenties, Andrae got more entrenched into cinephilia and filmmaking, and playing music became less and less of a priority until it pretty much stopped. So when Tired of Triangles began in Southwest Florida in the middle of the twenty-tens, there was quite a learning curve as he became acclimated to his main instrument again and tried to wrap his head around new gear (particularly new guitar pedals) and advancements in digital recording.

A year later, after a good deal of futzing about, Tired of Triangles emerged with a finished album, Up at 4 A.M., which was self-released as a download only. Consisting of eight moody songs, each with a different sonic palette, it was intended from Day One to be the kind of music a person would put on in the middle of the night, having either stayed up “too late” or risen from bed ungodly early. To that end Up at 4 A.M. employed sparse vocals and treated minimalist guitar parts, exploring an at-first-groggy and kind of “dark” series of emotions before picking up mood-wise and ending with a lighter feel. Some of the themes and subjects expressed were: the shaking off of one’s haters (“You Can Let Go At Any Time, Champ”); what it’s like to be in a good state of mind (“On Being Well”); the joys of being a late night pedestrian (“Ped Loop Revisited”); the odd phenomenon of bands who use music to troll and intimidate others (“The Petty Trolls of Rock ’n’ Roll”); and coming into some money if one’s used to not having any (“Pauper’s Windfall”). The album even managed to include a Peter Hammill cover (“Ophelia”). Up at 4 A.M. was reasonably well received by Andrae’s small cadre of friends and considered a decent step forward after many years of musical inactivity.

Flash forward a bit, to the summer of 2017, and a new label Kaji-Pup Records emerged in Florida with the first Leila M. & Tired of Triangles 7”. In late winter of 2018 came another 7”, this time a split between the aforementioned duo and Tired of Triangles, the latter solo musical concern now sounding more like a full band, with more moving parts than ever before. In late spring of 2018, Andrae began work on his first novel, which as of press time is still being written. But lingering in the back of his mind was Kaji-Pup’s unspoken “one release per year” schedule, and it was eventually decided that Up at 4 A.M. would finally see a physical format release. But in the months and years since the debut Tired of Triangles album was originally issued on Bandcamp, Andrae had grown more skilled at putting together good mixes and had acquired far better software than what he initially started out with. So it was decided that every track would be revamped and remixed, with a couple of overdubs added or replaced, and more of an ear toward exhibiting a brighter sounding overall sense of equalization.

The result is the recording you have before you, a marked improvement upon the original in every way, rest assured. Up at 4 A.M. - The Definitive Version applies a more “professional touch,” but without abandoning the emotional feel and deceptively simple song structures that brought these eight songs into fruition in the first place. We here at Kaji-Pup are pleased with this release, and welcome it to our discography. We hope you like it.

All songs written by Dave Andrae except “Ophelia” which was written by Peter Hammill, used with permission from Sony/ATV Music Publishing.

Cover painting of Kaji the Dog by Will Radcliffe.

Up at 4 A.M. was originally released in May of 2016 on no label. It was revamped here for Kaji-Pup's third release, with every track being remixed and a few parts being added or re-recorded in March of 2019. This is the definitive version of this particular set of songs --- accept no substitutes.

Tired of Triangles is a musical concern based in Southwest Florida.

Bandcamp Daily  your guide to the world of Bandcamp